Volkswagen stopped selling its super-complicated cars in America a while ago. After watching the acceleration of this 2021 Touareg R, we wish they didn’t.

Under ambitious management, Volkswagen started developing some high-end vehicles about two decades ago. And while the Phaeton is only available in China, the full-fat Touareg SUV has enjoyed a successful new generation in Europe.

This YouTube video puts the focus on the 2021 Touareg R, which is both a kind of mild mid-life update and a performance powerhouse. It’s technically not the first of its kind, as the first-gen SUV had a version called the R50, powered by a 5.0 TDI V10. But not many people remember that.

Just like most VW performance vehicles, the Touareg R needs to rely on shared technology in order to make financial sense. Under the hood is an all-new hybrid powertrain that matches an electric motor with a 3.0 TSI/TFSI V6. The combined output is a respectable 455 hp (462 PS), which means it’s more powerful than the old SQ7 but less so compared to the new SQ7 TFSI.

If those numbers sound familiar, it’s because they’re the same as the Cayenne E-Hybrid, which Porsche began making in 2018. The Vdub sounds pretty good too, like a muted S4/S5.

Yet these are similar numbers to an early Golf 7 R. Needless to say, this is way faster than the Atlas which VW sells in America with a 2.0T or a V6. But we do see why Volkswagen can sell a luxury hybrid SUV in its home market and not in America. 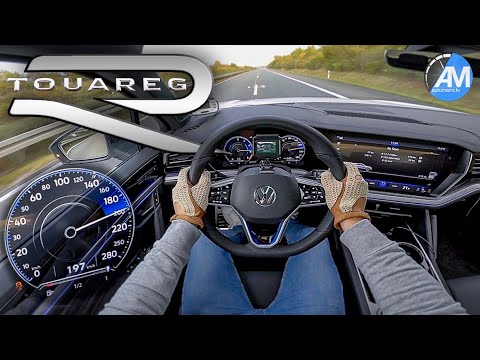