Gold trades on a solid footing and regains the critical $2000 mark, as the US dollar remains intrinsically weak on several fronts specific to the US. The Treasury yields remain pressured amid dwindling economic recovery and fiscal stand-off.

Meanwhile, the safe-haven gold benefits from renewed US-China tensions on the Hauwei issue. Investors also look for safety in gold ahead of Wednesday’s FOMC minutes. Let’s look at the key technical levels for trading the gold’s latest run higher.

The tool shows that gold has taken out the key $2000 hurdle, the psychological resistance.

Ahead of that level, the immediate resistance awaits at $2008, the pivot point one-day R1.

To the downside, the critical cushion is located around $1991, which is the intersection of the SMA10 one-day, previous day high and Bollinger Band four-hour Upper.

A failure to defend that zone will accelerate declines towards the solid support at $1979, the confluence of the Fibonacci 61.8% one-week and SMA100 four-hour.

Here is how it looks on the tool 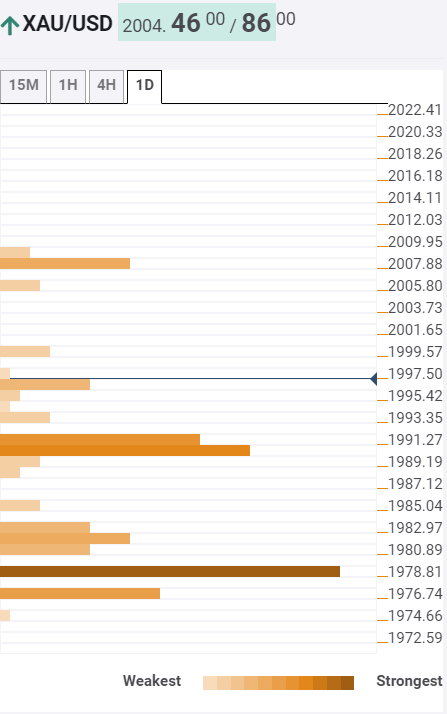 About the Confluence Detector

With the TCI (Technical Confluences Indicator) tool you can easily locate areas where the price can find a support zone or resistance zone and make trading decisions. If you are a short-term trader, you will find entry points for counter-trend strategies and hunt a few points each time. If you are a medium- and long-term trader, this tool will allow you to know in advance the price levels in which a medium / long-term trend can stop your travel and rest, where to undo positions or where to increase your position.