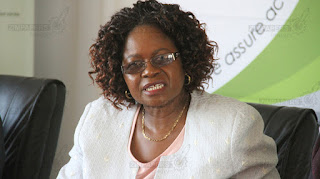 ABOUT 87
percent of imported goods are not being checked for quality thereby increasing
the risk of inferior products flooding the local market, Auditor-General Mrs
Mildred Chiri has revealed.

of Imported
goods”, she revealed that goods were being smuggled into the country despite
the existence of a legal framework to guarantee the importation of quality
products.

This, according
to audit findings, has led to a loss of revenue, low capacity utilisation in
the manufacturing sector, low employment levels and depletion of Government’s
revenue generation capacity.

“There were no
regulations governing quality assessment. As such most of the goods (87,5
percent) were not being checked for quality, increasing the risk of inferior
products flooding the market,” said Mrs Chiri.

“The ministry
(of Industry and Commerce) was taking too long to add more goods for quality
surveillance under the Consignment Based Conformity Programme (CBCA) programme.

“Compliance to
standards set by SAZ was not mandatory except for products which were under the
CBCA programme.”

She said there
was inadequate monitoring of goods in transit, absence of destination
inspections, lack of market surveillance as well as inadequate co-ordination
between the Ministry of Industry and Commerce and its stakeholders.

“There was no
destination inspection of goods at ports of entry to ensure that substandard
goods are denied entry into the country.

“There was no
market surveillance of imported goods or monitoring, of the calibration of
scales and measuring instruments used in industrial and commercial shops.”
Sunday Mail