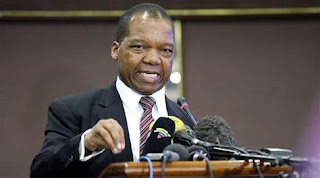 The Zimbabwe dollar firmed marginally for the first time
yesterday, by just under a tenth of one percent, to $83,3209: US$1 in the 11th
auction, reinforcing the high-level of stability seen in recent weeks as
markets succeeded in finding the real value of the Zimbabwean currency.
The weighted average fell from $83,3994 to $83,3209, a drop
of just under 8c or 0,094 percent.
The previous two auctions had seen minute slipping in the
exchange rate of around half a percent, the ninth auction slightly less and the
10th auction slightly more, and yesterday’s tiny gain was expected at some
stage as Zimbabwe moves into the sort of stability that sees tiny weekly
changes that can be up or down, with trends only apparent over several weeks.

Yesterday’s change was the smallest seen since the start of
the auctions, and the progress over the last month is leading analysts to
predict that prices could even start falling as producers and others accept
that they do not have to factor in the danger of huge exchange-rate swings into
their pricing models to cover the replacement cost of stock.

Without exchange rate pressures, actual costs rather than
feared costs, are more likely to dominate in costing models.
The gap between top and bottom successful bids remained
small. The top bid on the main auction dropped very slightly from $88 to $87,50
while the bottom bid fell from $80 to $76, as some importers looked for a modest
bargain while testing the market.

The SME auction saw a narrower bid range, from $76,50 to
$86. For the fourth week running, all valid bids were
successful.

There were 154 bids on the main auction, of which 25 were
ruled invalid since the bidder had missed one of the requirements set by the
Reserve Bank of Zimbabwe (RBZ), and 75 bids on the SME auction, with only 11
disqualified.
The fall in the number of disqualified bids suggests
bidders are getting better at ticking off the checklists.
The SME auction came close to allotments of US$1 million, a
new high for these smaller businesses, while the main auction saw total
allocations of just over US$15 million, roughly in line with the previous
trends.
As always, the bulk of allocations went to raw materials
with that category getting almost US$6,4 million of the allotted US$16 million.
Equipment got US$3,77 million, services US$1,6 million, consumables US$1,4
million and chemicals and pharmaceuticals just under US$1 million.
Economist Mr Eddie Cross, who is in the RBZ monetary policy
committee, described results of the latest auction as encouraging and a strong
indicator that the auction system now meets the needs of importers.

“We have seen a lot of stability in prices over the last
three months and we should start to see prices falling,” he said.

Mr Cross said the combination of the market-related auction
system and continuing measures to keep a tight control on liquidity flows and
expansion, which had been used speculatively to trade in currencies and so
hurting the Zimbabwe dollar, had narrowed the gap between the official auction
rate and the black-market rates to less than 10 points on street prices.
In his recent mid-term monetary policy statement, RBZ
Governor Dr John Mangudya noted that the auctions were now supplying 87 percent
of importers’ currency needs and the auction system had reduced volatility in
exchange rates, which had been the main driver in price increases in the first
six months of the year. Herald