UPGRADE:
The government wants to boost mining’s contribution to GDP to 3 percent by 2025, which now makes up only 0.1 percent and is done on a small scale

Nigeria’s first industrial gold project is on course to enter production next year and its success would be crucial for boosting mining in Africa’s biggest oil producer, the country’s mines minister said.

Thor Explorations Ltd is spending US$98 million to develop the project, which is to have an annual average output of 80,000 ounces.

The Canada-based company’s Segilola mine in the southwest should yield gold by the end of the first quarter of next year, Nigerian Minister of Mines and Steel Development Olamilekan Adegbite told reporters in the capital, Abuja, on Friday. 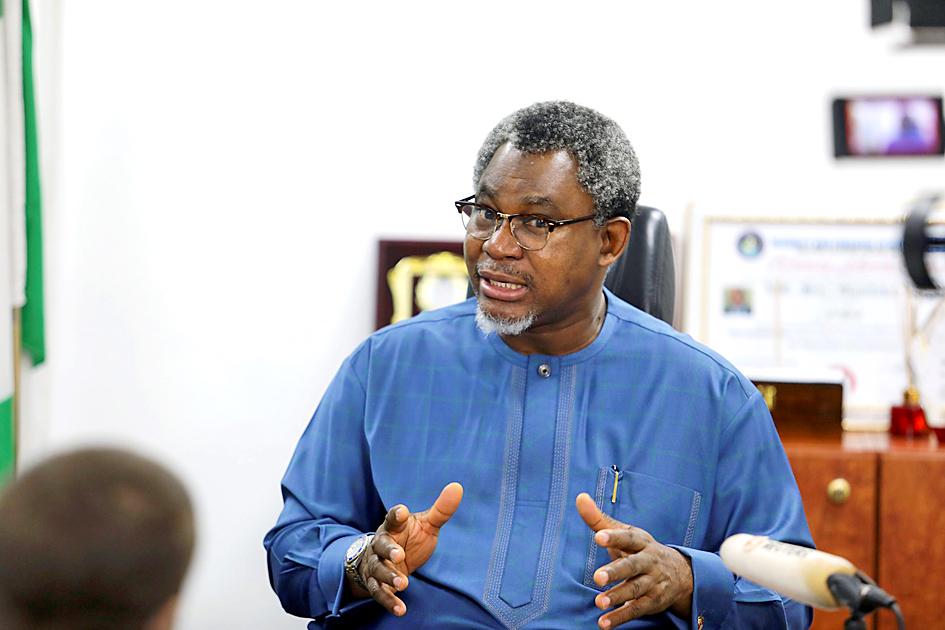 The West African nation has sizable untapped deposits of metals, including iron ore, gold, zinc and lead, but almost all extraction is done on a small-scale or manual basis. The government wants to increase mining’s contribution to GDP to 3 percent by 2025, from less than 0.1 percent currently.

Thor is “the proverbial company that dares to jump in the shark-infested water and see whether it survives,” Adegbite said.

Progress at Segilola would be key to attracting other mining companies to Nigeria, which offers incentives, including tax holidays and customs waivers on imported equipment, he said.

Successive administrations have pledged to grow mining’s role in the economy since Nigeria restored multiparty democracy in 1999.

Legislation to expand the sector was passed more than a decade ago.

The nation sitting on half the world’s lithium reserves has a calming message for electric-vehicle makers: Tougher environmental oversight would not threaten future production of the metal used to make batteries.

Chile’s environmental regulator is working with other agencies to devise a plan for improving supervision of mining companies that pump out hundreds of liters a second of lithium-laced brine from beneath the Atacama salt flat.

Under pressure from investors and customers, miners are investing millions to reduce their footprint and they too have said that should not constrain output.

While the main objective is to mitigate the impact on the fragile ecosystem and local communities, the new integrated approach to oversight should not jeopardize production in an era in which sustainability is a starting point, said Cristobal de La Maza, who heads the agency known as SMA.

The Chilean expansion plans of Albemarle Corp and local rival SQM are crucial for the industry to meet demand that is expected to triple in the coming years, with lithium a key ingredient in batteries that power vehicles and mobile phones.

“We don’t think this is something that goes against economic interests, although our role is clearly environmental,” De La Maza said by telephone on Thursday. “In environmental matters, what was valid 30 years, today isn’t acceptable.”

The initial reaction from companies has been positive, he said, adding that they understand Chile has to be competitive not only in production, but also in environmental standards.

On the same day as De La Maza spoke, SQM announced plans to cut its use of brine in half and produce carbon-neutral lithium by 2030 — without restraining output.

That follows a lost legal battle that forced the Santiago-based company to redo a plan to address over-pumping of brine.

Comments will be moderated. Keep comments relevant to the article. Remarks containing abusive and obscene language, personal attacks of any kind or promotion will be removed and the user banned. Final decision will be at the discretion of the Taipei Times.