On another day of losses among high-flying US technology stocks, the electric car maker’s stock dipped below $336 from $500 a few days ago. 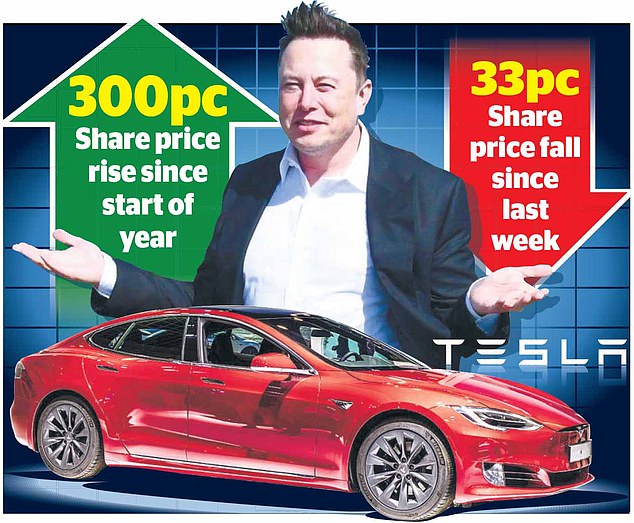 The Tesla sell-off leaves it worth £240bn, denting the fortune of boss Elon Musk. But shares are still four times higher than at the start of the year

The sell-off fuelled fears that the tech rally that pushed stock markets to record levels in the wake of the Covid-19 outbreak has faltered.

‘I’m not going to throw in the towel here and say the tech run is over,’ said Dennis Dick, a trader in Las Vegas. ‘We came a long way and it’s time to cool off a little bit.’

Tesla fell after its surprise exclusion from the prestigious S&P 500 index.

Inclusion would have triggered even greater demand for its shares from funds that track that benchmark.

At its peak last week, Tesla was valued at more than £350billion.

The sell-off leaves it worth £240billion, denting the fortune of boss Elon Musk. But shares are still four times higher than at the start of the year.