Wall Street has slid after US President Donald Trump said he and his wife had tested positive for coronavirus just weeks ahead of the election.

As predicted, all three of America’s main share indexes – the Dow Jones, the S&P 500 and the Nasdaq – were down at the start of trading.

Live updates on coronavirus from US, UK and around world

In Europe, stocks also trimmed or even reversed their losses by the close.

The financial jitters followed Mr Trump’s announcement on Twitter that he and his wife had tested for coronavirus after Hope Hicks, a senior adviser who recently travelled with the president, had also tested positive.

Please use Chrome browser for a more accessible video player 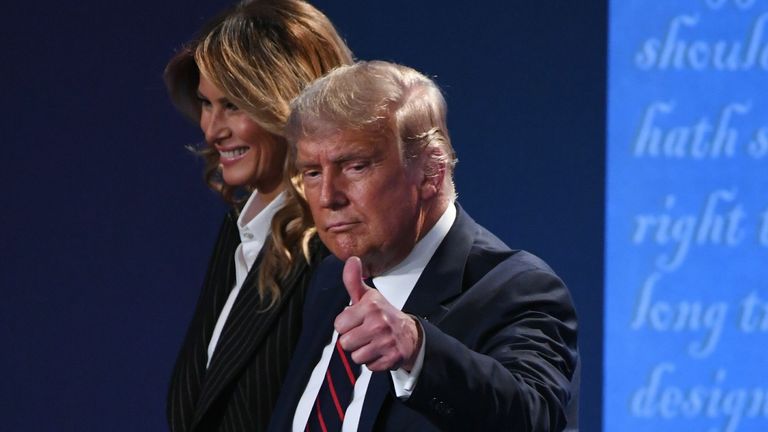 Where has Trump been?

He said: “We will begin our quarantine and recovery process immediately. We will get through this TOGETHER!”

It sent sent investors scrambling to the perceived safety of the dollar, yen and gold.

Analysts said the news could hurt Mr Trump’s campaigning ability and heighten market volatility at a time when investors
were already skittish after an ill-tempered presidential debate heightened fears of a messy transfer of power.

Please use Chrome browser for a more accessible video player “And given that Trump does not adhere to conventional norms and rules, who knows what he’ll do in terms of postponing the elections.”

Meanwhile, data showed US job growth slowed more than expected in September as the recovery from the COVID-19 slump shifts into a lower gear, although the unemployment rate fell to 7.9% from 8.4% in August.

“My initial reaction was, ‘ouch!’ I don’t think it’s going to do anything for the market; it’s not positive enough,” said Patrick Leary, chief market strategist at Incapital in Minneapolis.