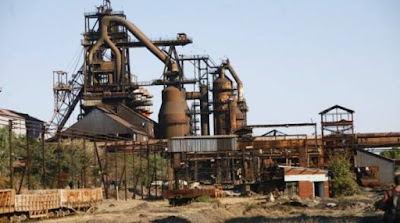 THE deal between defunct steel giant Ziscosteel and
ZimCoke, has been cancelled with immediate effect, acting Ziscosteel board
chair, Engineer Martin Manuhwa, has said.
ZimCoke was set to take over a coke oven within the defunct
Ziscosteel in a $255 million deal, which was viewed as the first step towards
revitalisation of the steel giant.
The two companies signed an agreement of sale in 2017 when
ZimCoke bought the coke-making assets of Zisco consisting of the plant and
machinery, land and buildings, and associated infrastructure of coal handling
and wagons.
But during the tour of the company by the inter-ministerial
taskforce committee recently, Eng Manuhwa broke the news that the deal had been
cancelled.
“We would like to put in on record that we have cancelled
some deals that are not favourable to Zisco’s interests. The ZimCoke deal is
one such agreement that has been cancelled and we have since informed our
partners in that regard,” said Eng Manuhwa.
He said the investors would, however, be considered in
future deals.
“I am sure we are appealing for their co-operation and
future co-operation in win-win engagements.

“We are for the integrated steelmaking business with value
chains that share the same vision with us,” he said.

The development comes as chair of the inter-ministerial
committee and Industry and Commerce Minister, Dr Sekai Nzenza, made it clear
that Government had no time to entertain non-committed investors.
She said the resuscitation of Ziscosteel was of paramount
importance to the country’s economy.
Meanwhile, Eng Manuhwa raised concern over vandalism and
theft of Ziscosteel assets.
He appealed to the joint operation command to come in and
assist in securing the company’s assets.
“I would like to appeal to JOC to assist us provide
security to Ziscosteel’s assets. Unprecedented vandalism and syndicated crimes
will surely make the cost of resuscitating Zisco very high. We want to see
these syndicates busted and culprits apprehended,” he said.

Minister Nzenza also raised concern over the disappearance
of assets and called upon the management to act swiftly in addressing the
issue.

“I have no doubt that
the new board together with management are prepared to tackle the Ziscosteel
strategic issues pertaining to asset stripping, debts, asset register,
security, identification of a partner and strategic plan among other various
issues. I call upon management to come up with specific measures to curtail
loss of assets and debt accumulation,” said Dr Nzenza